Several years ago, I installed motion-activated cameras throughout the interior of our home. When triggered, an image would be sent to my email. I am continually monitoring my emails to detect any unexpected movement. The system has worked very well and I have been alerted to strangers peeking through our front door, gardeners traipsing through the back yard, and our dog agitated over a random noise. Recently, the cameras recorded a very unusual event.

I was at work when my email alerted me to a motion in the dining room. In the past, I have dismissed these images as the random movement of the wind stirring the nearby bushes or trees. However, when the email alert continued, I intently examined the images that were captured. Quickly scanning the photos, I noted the curtains moving. How odd, I thought. Did someone leave the window open? I opened more emails and was greeted with a long dark shadow, lurking behind the curtains. What is that? Was someone trying to break into the house by inserting a probe? More emails revealed the silhouette of what appeared to be a small animal. It resembled a cat but I thought that highly unlikely. Wait, got it! It’s a raccoon. We had successfully survived an attack by a family of raccoons just last year, capturing and releasing them several miles away. Perhaps they had returned, seeking revenge? The next photos showed this wily creature scampering up the window screen, attempting to find an exit. It’s going to tear through our screens and curtains! Another photo showed the curtains moving in two different locations. Were there more than one? What was this intruder? 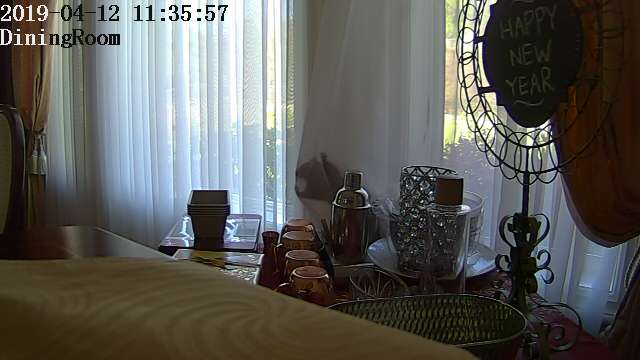 Within a few minutes, I knew the intruder’s identity. It was a squirrel! Another camera captured it standing right in front of our dog who did what any fearless watchdog does, ignored it! I alerted my wife to the intruder and by the next day, we managed to allow our houseguest to exit through the open garage door, from where it presumably entered.

When we do not know the true identity of an intruder, our imaginations often run wild. We are in a hyper-vigilant state until we learn the truth. I wish that I would maintain this same level of alertness in my spiritual life.

And no wonder, for even Satan disguises himself as an angel of light. So it is no surprise if his servants, also, disguise themselves as servants of righteousness. Their end will correspond to their deeds.

Satan is the constant intruder in my life.  Although I know who he is, his identity is not always evident to me for he disguises himself, cloaking his identity behind noble and moral facades, sometimes even as an angel or agent of God, such as a priest or minister. Unlike the shadowy figure of the squirrel behind my curtains, I need not fear him but I should not be ignorant of his schemes. I fall victim to his lies, not because he is so strong, but rather because I am so weak. I am unwilling to completely trust God through faith in Jesus Christ and simply resist Satan’s advances.

Submit yourselves therefore to God. Resist the devil, and he will flee from you.

Jesus Christ has defeated Satan. Praise God that He has delivered the victory to all believers in Jesus Christ.

Love and trust the Lord; seek His will in your life.